Apply for a grant

I hope you are all as healthy and happy as possible wherever you are.  And that you are managing to live comfortably under whatever restrictions COVID-19 is causing at the moment.   For Australian readers, that’s likely to mean quite severe lockdowns for many of you this week.

Optimistically, we have re-scheduled our gathering of June’s community to talk about Our Next 10 Years from November last year to Saturday 30 October this year.  The details are included in the Newsletter.  This is likely to be a “hybrid” event, with some people in the room and others connecting in via videoconference.  If you are interested in being part of this gathering, please contact me for more details, or to let me know of your interest. The more voices the better, so please feel very welcome regardless of what role you played in June’s life, in my life or in the first 10 years of the Foundation.

Stay safe and bye for now,

I hope you have all either endured or enjoyed the last few months of being at home.  And most importantly that you and your families are healthy.

For those of you here in Australia, we have two events coming up later this year to which you are warmly invited:

Please feel free to contact me if you are interested in either of these events, or if you have comments or suggestions about the Foundation.

The latest edition of the June Canavan Foundation newsletter is available.

Details of our 10 year anniversary trip to Papua New Guinea are included.  If you would like to visit some  of the projects the Foundation has supported over the last few years in Papua  New Guinea and participate in a commemoration service at the Australian High Commission for those who lost their lives in the Kokoda air crash in August 2009, please contact met for the details. 2019 April – JCF Newsletter

Following the success of last year’s event we are doing it again! Join us for a home match of the Sunshine Coast’s very own netball team to celebrate June’s love of netball and our partnerships with The Confident Girls Foundation and the University of the Sunshine Coast.

Many of you will know how much June loved her netball. After playing for Wangaratta, she travelled to NZ to play in the regional competition there, before going on to represent Queensland and win a University Blue for netball. Imagine how excited she would be to know that the Sunshine Coast is now home to one of the 8 professional teams in the brand new Super Netball Competition. Where the players get paid!

So join members of the Board at our next JCF Friends gathering, to celebrate our partnership with the Netball Foundation and the University of Sunshine Coast.

We have a limited number of premium courtside seats with pre-match hospitality and a chance to meet some of the Lightning players and their wonderful coach Noeline Taurua. Saturday June 2nd, 3.00pm,  University of the Sunshine Coast, Sports Stadium 90 Sippy Downs Road, Sippy Downs

The latest edition of the June Canavan Foundation newsletter is available

For those in Queensland, or travelling to Queensland, you may wish to  join us at either or both of the following events:

And wherever you are in the world, you may wish to consider a 10 year anniversary trip to Papua New Guinea in August 2019.

More details of these events are included in the newsletter.

The June Canavan Foundation recently funded ‘the Nature Conservatory to bring nine women from Papua New Guinea to Brisbane for the 3 day  workshop ‘Nature’s ‘Leading Women’, The workshop brought together women from Indigenous Australia and the Pacific Islands to build skills, knowledge and networks, facilitate cross-cultural learning and to develop entrepreneurship and a sustainable business project for their region.  Kerry Meehan, Brisbane based JCF Director shared her experience of attending the workshop. 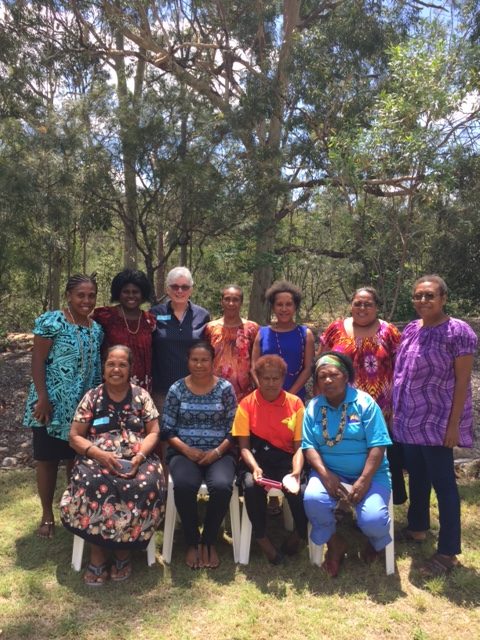 Keery Meehan with the PNG women

“I have just spent the most wonderful few days with these extraordinary women from PNG.  It was so exciting spending time with them at Ivory’s Rock (a nature reserve Conference Centre) as they devised ways of economically fishing their mangroves while ensuring their preservation.  During that time they developed the shell of a business plan including Vision and Mission Statements, Logos etc.  I sat with them during this process.  They called themselves the Mangoro Maket Meri and their slogan was from Mangrove to Menu.  Their presentation on Thursday night at the State Library was excellent.   250 people attended the presentation with representatives from Universities, the ANZ bank, Conservation Bodies, The American Consul from Sydney and the PNG Consul, the Anglican Archbishop of Brisbane. All in all I believe our funding was well spent.  They thanked me many many times for making it possible for them to attend.”
Kerry Meehan, JCF Director 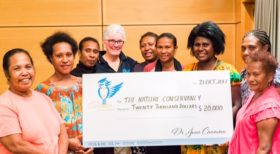 Welcome to the April 2017 edition of the June Canavan Foundation newsletter. This edition will cover the following topics:

Many of you will know how much June loved her netball. After playing for Wangaratta, she travelled to NZ to play in the regional competition there, before going on to represent Queensland and win a University Blue for netball.

Imagine how excited she would be to know that the Sunshine Coast is now home to one of the 8 professional teams in the brand new Super Netball Competition. Where the players get paid!

So join members of the Board at our next JCF Friends gathering, to celebrate our partnership with the Netball Foundation and the University of Sunshine Coast.

We have a limited number of premium courtside seats with pre-match hospitality and a chance to meet some of the Lightning players and their wonderful coach Noeline Taurua. Saturday 20th May 2017 6.30pm University of the Sunshine Coast, Sports Stadium 90 Sippy Downs Road, Sippy Downs

Please RSVP by 10th May by going to the Trybooking event page (the link is in your April JCF newsletter) or contacting Anne Gripper on 0409 813 260.

Catch Up With Gemma

The June Canavan Foundation board members were thrilled to catch up with Gemma Sisa, founder of the School of St Jude, during her recent trip to the Sunshine Coast. Gemma gave us an update on the school’s tertiary scholarship program, and we  had the pleasure of meeting Winnie, one of the most recent year 12 graduates. Winnie , currently undertaking her community service year at St Jude, generously shared with us her life and educational challenges, as well as her achievements and  her pride at being granted a scholarship to study aeronautical engineering in the USA. We wish Winnie well in this daunting but exciting adventure, and look forward to hearing more about the students who have been able to undertake tertiary studies thanks to the amazing work of Gemma and the School of St Jude. 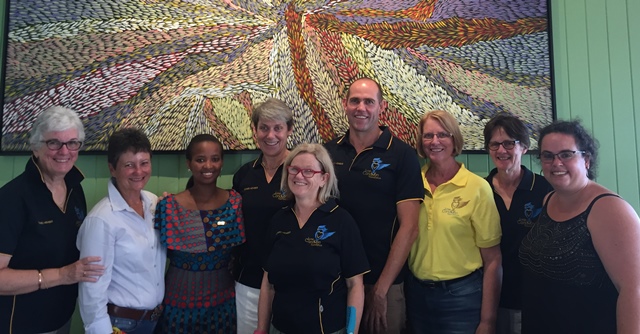 The June Canavan Foundation  is delighted to announce the provision of a $50,000 grant to the Netball Foundation  to help empower marginalised girls through netball.

funds will be used to support the Confident Girls initiative, which uses netball as a tool to improve the mental, physical, social, psychological, and the emotional health and wellbeing of marginalised girls and their communities.

On the ground, the donation will support the expansion of programs including the Gazelles Empowerment Program, introduced by the Gazelles Netball Club in the Baulkham Hills Shire Netball Association.

The Gazelles Program is broken down into face to face delivery modules, resources and coach and parent takeaway/handouts, focusing on the Empowered Girl, the Resilient Girl, the Confident Girl, the Compassionate Girl, the Active Girl and the Connected Girl.

The Gazelles Netball Club, in partnership with Netball NSW, will now engage six to eight pilot clubs in rolling out the program in 2017, while working with Western Sydney University on engaging a research student to evaluate the impact of the empowerment program.

Nadine Cohen, CEO of the Netball Foundation was honoured to be a beneficiary of the June Canavan Foundation.

“This funding will make a huge impact on the lives of marginalised girls and their communities, helping to bring the transformative power of netball to reduce gender inequality across Australia and to bring about positive social change.

The June Canavan Foundation was established in 2010 to honour the memory of Dr June Canavan, a much loved sports physician and family doctor living and working on the Sunshine Coast. Her life was cut short when she died in a plane crash while travelling to Kokoda, Papua New Guinea in August 2009.

The June Canavan Foundation is creating a legacy which builds on June’s humanitarian work, providing financial and other support to existing projects in four areas close to June’s heart: sport, health, education and conservation.

“With Sport and netball close to June’s heart, we loved the community impact of so many of the projects that the Netball Foundation has created and supported over the past 12 months. We are confident that there are many more confident girls out there now than there were a year ago,” said Anne Gripper, June Canavan Foundation Chair.

The Netball Foundation is the fundraising entity of Netball Australia – raising and granting funds to empower marginalised girls, women and their communities through netball.

Thanks to the Netball Foundation’s partnership with the Australian Sports Foundation, donations of $2 or more are tax deductible. You can have an impact and help to give every girl a chance! Make a donation by clicking here.